The Future (of Fins) Is Curved 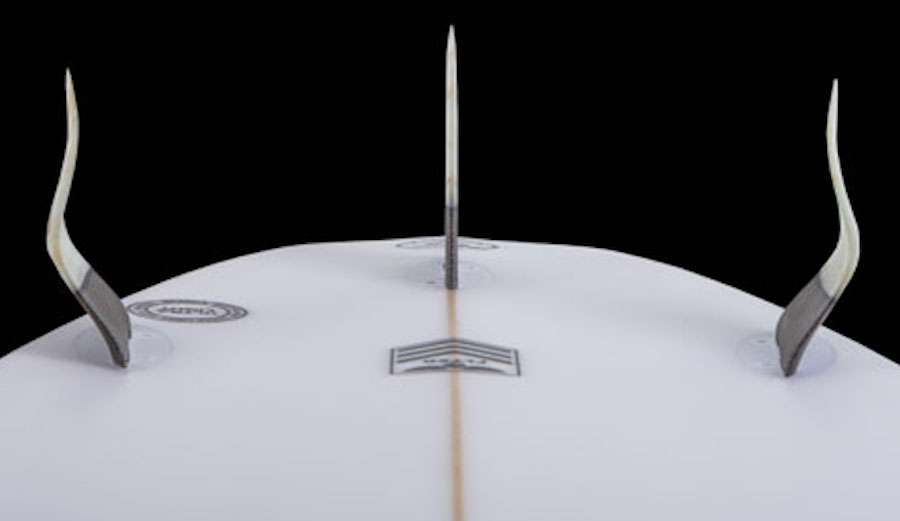 In 2005, Devon Howard opined that “Nearly every quantum leap in board design has revolved around the fin and its various configurations.” Changes to rake, foil, cant, and surface area notwithstanding, pivotal moments in surfboard fin history are centered around the number of fins on the bottom of a board. Names like Mark Richards and Simon Anderson are synonymous with the number of fins they preferred. And now, it isn’t uncommon to see a board with anywhere from one to five fins in the lineup.

But for all the openness modern surfers seem to show toward fin quantity, they are notoriously skeptical about fins that diverge from the typical linear design. The Turbo Tunnel and FCS’ effort to add curve with their PC-CRV fins are two of many attempts to innovate fin design that never really took off.

Brad Pierce and Kevin Borba of AU Fins out of Dana Point, though, are undeterred. The pair have developed a fresh take on curved fins that are unlike anything out there. Conceptually, they bridge the gap between speed and control in a way flat fins simply can’t. The company’s tagline, “Waves aren’t flat, why are your fins,” hints at Pierce and Borba’s inspiration.

“Traditional fins draw inspiration from animals in the ocean,” said Borba. “But animals travel beneath the surface of the water, and surfboards travel on the surface, and on waves that naturally curve.”

Pierce and Borba, who also own a gold shop (which is where AU, the chemical symbol for gold, comes from), describe the concept for the idea as essentially getting lucky. Call it striking gold.

“For the first prototype, it was so expensive to make a mold that we only made a mold for one side,” said Pierce. “We traded off a board with one curved fin and one flat fin in the lineup and there was a noticeable difference turning on one side than the other. That was when we knew we had something.”

Then, over the course of the next few years, they set to work developing templates and putting their concept into production.

Pierce and Borba were kind enough to send me a 5-fin version of their Signature Series. Pulling them out of the bag was an “Oh, shit” moment. The things look wildly different than any fins I’d seen in my life.

“Take ’em out in good waves,” Pierce advised. And I obliged.

During a good run of swell, I put the two curved side fins (the quad trailers and middle thruster fin are flat) in my 5’10” twin-fish and went to the HB Pier. I can only describe the sensation I felt as “grabby” without being slow. Turns where I normally had to compensate for a potential skid-out were controlled. The difference was clear. Since trying them myself, I’ve passed them around the office and to friends, all with similar reviews. “Whoa, I feel like I have way more control,” they say. “These definitely feel different.”

According to AU, water that’s propelled off the curve of their fins produces a curved vortex that results in lift, as illustrated here. Photo: AU Fins

Pierce says that while AU may not be the first company to design curved fins, their design is unique. “If you take a look, the curve isn’t continuous like with, say, the FCS CRVs. They go vertical from the base, curve out, then curve back in with a vertical tip. That doesn’t compromise thrust, but still gives you the lift.”

Of the thousands of sets of fins AU has distributed, they say the response has been 98 percent positive. “Typically the complaint is they’re too ‘sticky,’” said Borba. “But what I tell guys is to change the trailers. If that doesn’t work, I say, ‘Try a different template.’ Only a handful of guys have gone on after that saying they don’t like ’em.”

With all the positive feedback, it’s likely only a matter of time before AU makes their debut on ‘CT. But Pierce and Borba have goals to continue to innovate.

“We don’t just want to do fins, we want to be a company that pushes the limits of all elements of board design and surf accessories. We’re already working on what we call the ‘AU tail’ that compliments our fins, and we’re hoping to do even more,” said Borba.

0
0
Your Cart
Your cart is emptyReturn to Shop
Continue Shopping
Products you might like
Calculate Shipping
Apply Coupon
Available Coupons
aufamily Get 30% off
aufriends Get 10% off Thank you for your support!
Unavailable Coupons
black Get 40% off Cyber Monday