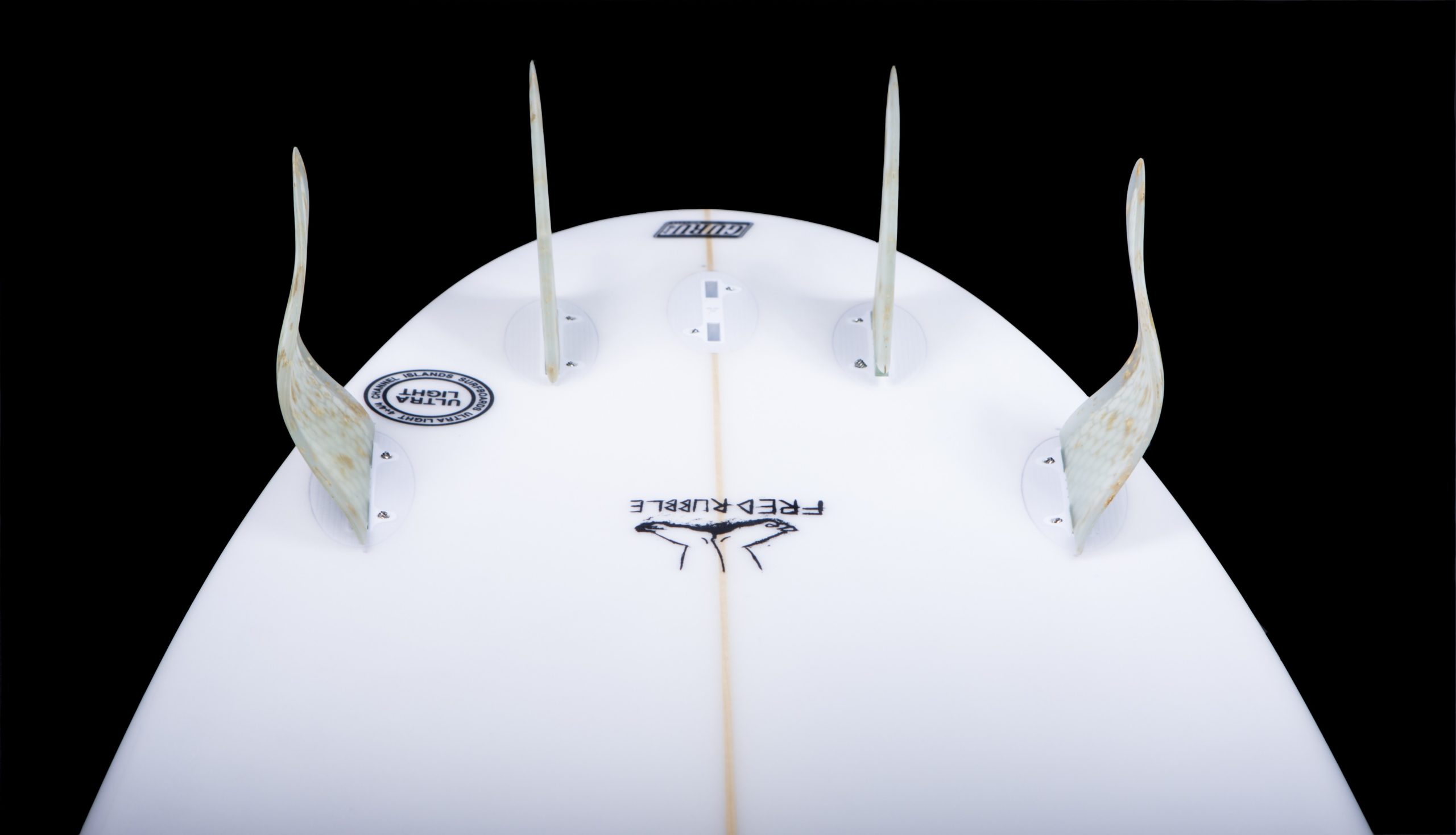 For the past two decades, the shape and contour of thruster fins haven’t changed much. Sure, there’s been advancements in materials and flex and foil, but the overall silhouette of tri-fins has remained fairly constant. But as of December 2016, there’s a new fin on the market–one that looks alien at first glance, but their surprising functionality proves the old adage about books and covers.

They’re called AU Fins, and they were created by Brad Pierce and Kevin Borba, two surfers from Dana Point, who practically stumbled on a new, hydrodynamic fin design. “A little over two and a half years ago, Borba took a trip to Indo and brought back this wild single fin,” says Pierce. “It was made entirely out of Bintang cans, but it was shaped like an S.” The shape, rather than it’s material, is what sparked the duo’s interest. Pierce took the general template of the fin and tweaked it to fit what he could ride with his standard shortboard.

“We had no idea what made it hydrodynamic,” says Pierce. “It was a crazy-glue moment where we got lucky with the curve we put it in and it happened to work.” After two years of prototyping and testing the fins themselves in a variety of conditions, they arrived at the shape of fins that are available now: a regular base that bends into a mid-face curve, and then straightens again toward the tip of the fins.

For only being in business for half a year, AU Fins have already won the approval of some more open-minded pro surfers. A couple months ago, Nathan Fletcher posted a couple photos on Instagram of the alternative looking fins slotted into the bottom of his Stretch boards. “They’re insane,” Fletcher told me over the phone last week. “They’re fast and loose and they turn well. I’ve been riding them mostly in smaller head-high, glassy waves and I love them. It’s insane they even work because of how weird they look.”

Zander Morton, SURFER’s Field Editor, and I took the fins for a whirl and had a similar experience. “I figured the best way to feel a difference in these fins was to put them in the board I’ve been riding for a month, a Superbrand Unit, which I love in average San Diego surf,” Zander told me, when we were comparing notes. “On my very first wave I felt a noticeable difference in speed — with the AU Fins, the board felt about 15 percent faster, which is obviously a really good sign, especially in conditions that require a bit of work. I also felt they held nicely through drawn out turns, and projected well over flat sections. They were a little tricky in tighter pockets, and a little sticky coming off the top, so I think these fins are best suited for down the line surf. I’d love to try them at a pointbreak, as I think they would fly around long sections and hold through drawn out turns.”

While their current AU Black Gold Model (which Zander and I tested) are suited for down-the-line speed, fast rail-to-rail transitions, and powerful carves (thanks to its really raked-out design), Pierce and Borba are developing a new template that will create better pivot and allow surfers to go straight up into the lip and throw the tail around.

The fins definitely have a peculiar appearance, and it’s easy to imagine dyed-in-the-wool traditional shortboarders raising a suspicious eyebrow at the funky design. But the creators of these futuristic fins are hoping that the slow evolution of a more open-minded surf culture will help business. “If we had released these fins 10-15 years ago when the average surfer was more closed-minded, it would have guaranteed been harder,” says Borba. “But because of new surfboard shapes that have become popular over the last few years, like Dumpster Diver type boards, we have a surf culture that is open to new designs.”

According to Pierce, if you can be more open-minded to riding a non-conventional fin shape, you might be pleasantly surprised at their effectiveness. “They’re fast, they generate speed in mushy stuff and in overhead rippable stuff, and they harness the speed really well in bigger, barreling conditions,” says Pierce. “Those are the two things you want in a great fin: to generate speed in the small stuff and be able to harness speed in the big stuff.”

1
1
Your Cart
You're $70.01 away from free shipping.
6+ shoppers have bought this
AU 24K Thruster - Two-Tab
Price: $79.99
- +
$79.99
Empty Cart
Have a Promo Code?
Subtotal $79.99
Shipping No shipping options were found for CA.
Total $79.99
Continue ShoppingView CartCheckout
Products you might like
Calculate Shipping
Enter your address to view shipping options.
Apply Coupon
Available Coupons
aufamily Get 30% off
aufriends Get 10% off Thank you for your support!
Unavailable Coupons
black Get 40% off Cyber Monday